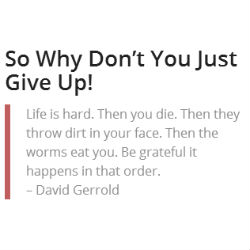 So Why Don’t You Just Give Up!

Life is hard. Then you die. Then they throw dirt in your face. Then the worms eat you. Be grateful it happens in that order.
— David Gerrold

When I was 32 years old, I was considered a loser.

I’d been striving to be a rock star on the hard streets of Hollywood, working whatever job I could find to support my wife and two young daughters, but no doubt about it, the future didn’t seem all that secure.

And the truth was I’d done a lot of things without a huge amount of measurable success.  Pretty much I’d been doing all the things that were interesting and creative and fun and not worrying too much about how I was going to support a family now and in the future.

So my wife convinced me to go back to college.

Just for the record, that’s NOT the optimal route to supporting a wife and family, but that’s what I decided.

So I started back to school …

But there were problems!

First of all, I played a little guitar (not very well) but that was it.  Zero piano skills, didn’t play another instrument.

I could sing, but I was a bass/baritone and couldn’t tell you the notes on the bass clef.

What can I say … I was fearless.

I was a bit out of place.

First of all, most people starting college for a music degree are 18 years old, not 32.

I had a wife,  two young daughters, a full-time job and a couple part-time ones and was carrying a double load of courses.

I was also in a hurry.

The day that I started, a brand-new music professor lead the choral program.  He was fresh from receiving his — still wet from the press — doctorate at the University of Oklahoma and as far as we understood, he seemed to think he knew everything in the world about choral music.

And he wasn’t afraid to let you know.

Setting himself up as head drill sergeant he plowed through the ranks of the choral department like a tank, leaving bodies everywhere.

He intended to raise the standards of the choral program and make a mark for himself in record time.

Proudly displayed on his T-Shirt was the saying …

At first I was convinced that he was determined to make everyone’s life very hard and then possibly to kill them off one by one, but then my perspective changed a bit and I discovered that he was a lot like me.

He was a little scared I think.

This was his first big position and he needed to be outstanding.  He was trying to do that very hard.

Along the way he alienated big chunks of the staff and students, but he learned quickly a little humility can go a long way.

Eventually we both relaxed enough to breathe.

And I found him to be amazingly supportive of me and my Quixotic efforts to learn something about music.

That wouldn’t have been true of everyone.  Dr. Belan was amazing at taking me exactly where I was — with zero skills — and moving me to a higher plain.

Eventually, I finished a 4 year degree in two years, by really scrambling, and then went on to a graduate degree studying with Dr. Belan, but it wasn’t easy.

Along the way Dr. William Belan was an amazing support to me.  He challenged me every step of the way and showed me that perseverance and quality  are valuable beyond measure. Dr. Belan has been been teaching choral music for over 30 years at California State University, Los Angeles and directs one of largest choral conducting graduate degree programs in the United States.

So many times along the way, I could have quit in an instant.

I think it was partially my desire not to let Dr. Belan down after all of his support that kept me going through 6 years of studying when it wasn’t easy to juggle the jobs, the family and the kids along with getting my degrees.

Today I got requests for help from two desperate people.

They are both living in situations with seemingly hopeless prospects.

They believe they will not be able to make it without my help or at the very least they want me to take their pain away.

Of  over 60,000 people who are members of my sites, come to my live events or subscribe to my newsletters, many of them are going through terrible times.

There’s a 10% Chance of Awful Things Happening to YOU this Weekend.

For any given weekend, I project that 10% of all of the people have something major go wrong in their lives, such as the lost of a loved one, divorce, loss of job, serious accident,  etc.

That means in my family that 6,000 people are having a major problem right now.

And I want to help.

Maybe the t-shirt has it right.  “Life is Hard. Then We Die.”

Life is certainly hard at times.

But even if it were true …

What good does it do to give up?

What can the world gain if you stop short of your goals?

Albert Einstein did not speak until he was 4-years-old and did not read until he was 7. His parents thought he was “sub-normal,” and one of his teachers described him as “mentally slow, unsociable, and adrift forever in foolish dreams.” He was expelled from school and was refused admittance to the Zurich Polytechnic School.

Charles Darwin gave up a medical career and was told by his father, “You care for nothing but shooting, dogs and rat catching.” In his autobiography, Darwin wrote, “I was considered by all my masters and my father, a very ordinary boy, rather below the common standard of intellect.”

F. W. Woolworth was not allowed to wait on customers when he worked in a dry goods store because, his boss said, “he didn’t have enough sense.”

Walt Disney was fired by a newspaper editor because “he lacked imagination and had no good ideas.” He went bankrupt several times before he built Disneyland. In fact, the proposed park was rejected by the city of Anaheim on the grounds that it would only attract riffraff.

Do you want to quit 3 feet from the gold?