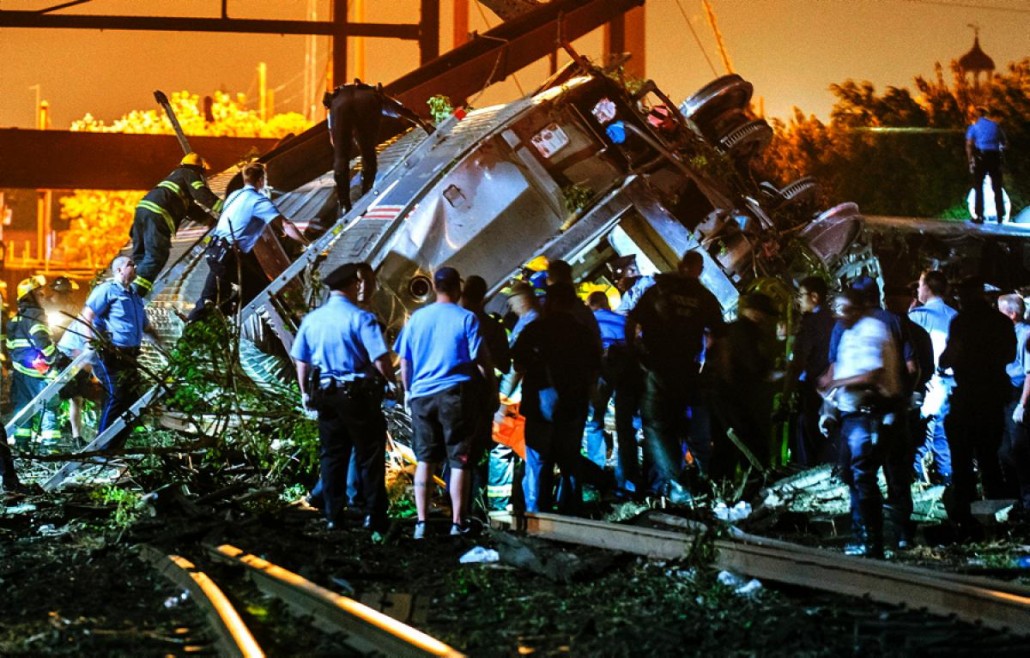 “Nice Guy in Philadelphia Kills at Least 3 and Injures Dozens – Claims He Did Nothing.”

The national headline this morning is “Amtrak Train Derails in Philadelphia, Killing at Least 5 and Injuring Dozens,” but what if it were, “Nice Guy in Philadelphia Kills at Least 3 and Injures Dozens – Claims He Did Nothing.”

That’s the indescribable horror of your personal impact.

It’s a good thing we can rationalize away the truth and ignore the power we have at our fingertips, because if we couldn’t the weight of the impact we have on others over the course of a lifetime, would kill us for sure.

I can think of at least 3 people that might be alive today if I had chosen to do something instead of nothing. One might be alive either way, but two are definitely dead.

The first was a young woman who had recently joined the church choir I was directing. 3 AM in the morning, I fumble for the phone trying to grab it while my wife, mutters something like, “Who is calling at 3 AM?”

For the next 2 hours, I talk her down from committing suicide and then after a couple hours of fitful sleep, call the church office to talk to the pastor.

It turns out he knows this lady well. For months she has been calling the office threatening suicide. So far she’s worked her way down from the senior pastor to the assistant pastor and now proceeds to latch onto the lowly choir director.

For the next couple of months it’s a 3 AM call every few days. Each time she is about to kill herself and my senior pastor tells me that there is a decent chance she will eventually.

In the meantime, my wife is not so happy about getting my getting calls from a young woman in the wee hours of the morning on a regular basis.

Eventually, I stop answering the calls.

Fast forward a few years and I’m driving along a lonely country road at night, just about to go under a railroad overpass when I notice a young man lying on his back in the road, blocking my way.

My first thought is that he’s drunk.

There are no immediate signs that he’s injured, but he’s breathing in a fitful kind of gasp.

Headlights pull up behind me and a young woman gets out of the car, takes a look a the young man and tells me that she will go to a neighboring farm house to call for an ambulance.

As her headlights fade in the distance, I’m standing there thinking. Is he drunk? What if he stops breathing? The little gasps are still going so I know he’s alive, but I’m desperately hoping she will get back before the gasping stops.

It seems like forever and the breaths are getting slower and fainter. Is he still breathing?

Headlights stream back onto the scene and the young woman runs back over to the young man and begins CPR.

The ambulance finally comes and quickly disappears into the night with the boy.

The next morning the newspaper headline reads, “Recent Graduate Died From An Apparent Suicide After Jumping Off Of Overpass.”

Then there’s the story of Miro Grudzinski.

Stacks of boxes of blindingly bright T-Shirts were all around him announcing “Side By Side We Are One” and before I could turn around, Miro had me in one excitedly snapping my picture.

Miro was on a mission …

His passion was to promote the spirit of unity, brotherhood, friendship and solidarity between Canada and the United States of America, and to honour all uniformed public servants.

And he was very intense.

How he was going to do that, I wasn’t sure, but it wouldn’t be for lack of passion.

Miro decided that he should go to my jvAlert Live event in Las Vegas despite the fact that he really didn’t have funds to do it.

He seemed to think that the funds would magically appear.

Who knows how he did it, but when jvAlert Live started, Miro was there.

He was staying over a half hour away from the event location to save money,

He was buying everything in sight with a borrowed credit card.

Every speaker’s program was exactly what he needed for his grand vision.

Finally, I had to talk to him and tell him that he really shouldn’t be buying all of these packages.

Miro argued passionately with me that I didn’t understand and pleaded with me to meet him very early the next day so he could talk to me and show me his plan.

I wasn’t the only person who was concerned about Miro.

His passion was making some of the attendees cringe a bit.

Ever meet someone with too much passion about something?

Early, early the next morning I met with Miro and discovered that he slept overnight outdoors so he could meet with me.

Miro pulled out a stack of papers and pictures.

He had a massive plan, business structure and pictures of hundreds of officials and people he had met who were involved in his project including the Prime Minister of Canada and Members of Parliament.

And then he told me that he would have his own trailer by the time we met next.

That was hard to believe.

He was standing there with no money in his pockets, and thousands of miles just to get back home.

At the next jvAlert Live, he was there with his brand new truck and trailer.

Where Did This Extraordinary Man Come From?

Miro was born in Poland into a middle class working family. After losing his father at age fifteen he grew quickly in his life experiences and was forced to look after his mother and two younger sisters.

In December of 1983, together with his wife Barbara, they successfully completed their Masters Degrees.

After university, due to the political and economic situation in Poland, Miro returned to the Electrical Engineering field, taking again employment contracts abroad and later started his independent trading and property renovation business.

Landing as a permanent resident in April 1992, Miro immediately started working as a building supervisor and operator of numerous properties and then started an independent business. Always aiming for excellence and perfection, Miro found himself among business, community and political leaders receiving their acknowledgment support and guidance.

In 1995, Miro and his wife became Canadian citizens a fulfillment of his childhood vision and dream as a nine year old boy, when in 1965 seeing a Canadian flag for the first time during an international fair in Poznan, Poland, a deep desire to visit and complete his destiny in Canada was implanted in his heart.

Miro was involved in the community work and established and registered a foundation for families and children with special needs “HOPE FOR THE FUTURE”.

In July 2002 with a group of strong supporters he started his stewardship mission and organized the first annual Hope for the Future Family Picnic with the attendance of the Mayor, Federal and Municipal politicians and the famous Canadian icon, the artist Charles Pachter.

Loyal to his citizenship and civic commitments, Miro also dedicated countless hours during previous and recent elections to support federal, provincial and municipal politicians regardless of their political affiliation. He always takes a stand to support those, whose major mandate is the welfare of the needy and less fortunate.

Meeting Mr. Charles Pachter and seeing his art in January 2002 he was inspired by the now famous painting “Side, by Side ­ The Painted Flags” dedicated to Ralph Gerhardt of Toronto and all victims of 9/11 disaster. Miro started his new life journey to promote the spirit of unity, brotherhood, friendship and solidarity between Canada and the United States of America, and to honour all uniformed public servants.

Using art in different forms and formats as the most powerful expression of the human spirit, and engaging art as the driving force to create financial resources, to support those in need, is the main direction of the development and teamwork of the devoted professionals who have joined in this great and fascinating life voyage.

Miro’s “Side By Side We Are One” is a nonprofit foundation specializing in raising money and providing programs for 9/11 victims and service personnel on a global basis.

It raises critical support funds and awareness organically, and in conjunction with global not for profit (NFP) foundations supporting similar causes.

To help commemorate the united efforts during the 9/11 crisis, Miro traveled back to where it all started to participate in a number of activities in New York City.

Miro was tireless … and tiring.

He was determined that I was the man to lead his mission to change the world and he called frequently and tirelessly.

I explained that I was on a mission of my own and while I wanted to support him in any way I could, the timing probably wasn’t right for me to take over his mission.

The phone calls didn’t stop, but I was slower in returning them.

A few months later, I got a phone call from a member of Miro’s team.

On Friday, January 27th, 2012, Miro took his own life in his home by hanging himself in a doorway after he sent his wife off to church.

Miro was a friend and tireless supporter and member of the Impact and jvAlert Live Family who served his adopted country faithfully and uniformed service personnel around the world with a passion that will be impossible to be replaced.

Ultimately, I had a choice to make in each one of these stories … and I chose to do nothing.

This says nothing of the injuries I’ve inflicted along the way which are countless.

The national headline this morning is “Amtrak Train Derails in Philadelphia, Killing at Least 5 and Injuring Dozens,” but what if it were, “Nice Guy in Philadelphia Kills at Least 3 and Injures Dozens – Claims He Did Nothing.”

That’s the indescribable horror of your personal impact.

Or … it’s the immeasurable opportunity you have to change the world.

It’s the small things that have the greatest impact. Just by existing you impact thousands and if you leverage your impact you can impact millions — in an overwhelming positive way.

You make a difference, whether you want to or not.