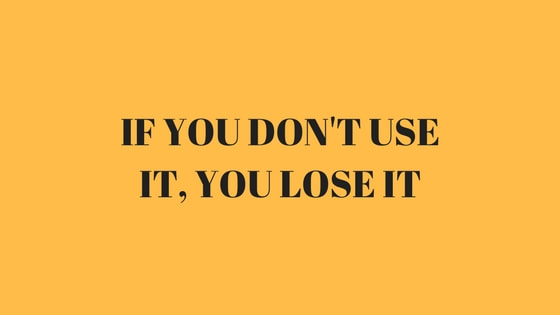 I’ve been an international speaker for over a decade now and been interviewed hundreds of times on podcasts, radio, and television, but if you don’t use it, you lose it!

For the last couple of years, I’ve been turning down interviews and speaking engagements to focus on finishing The Impact Factor movie.

Last week, I did my first speaking gig in literally years and now I’m about to embark on a new adventure of speaking and interviews talking about the project as we launch the movie over the next few months.

I have to admit, I”m not eager about putting myself out there again!

A client of mine told me this week that I was the WORST speaker among all of the speakers on his team!

By this, he means that I have crutch words, and UMMMS and AHHHHS.

I used to be a decent vocalist, but I stopped doing it and now I can’t sing!

I used to be a decent programmer, but now I can’t program!

If you don’t use it you lose it!

So what happens when you wake up one day and discover that you can’t do what you used to do so well?

One option is to start again.

This isn’t the first time that I stopped doing something for a decade.

When I was a teenager, I used to write original songs.

Then I stopped for a decade or so.

Then I picked up the guitar again and started writing songs.

It ended up being the most productive songwriting part of my life.

The good news is we can start again.

I’m cranking up my speaking and interviews now because I need to get the word out about the movie as we release it.

I’ve approached a couple of friends to ease my way back in.

What’s the other choice?

If you don’t use it you lose it!

P.S. By the way, if you want to be the first to see the movie, you can lock that in right now!
http://impactfactormovie.com/perks