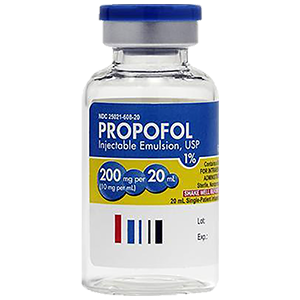 He was getting ready for a concert tour and desperately wanted some rest.

He got to sleep, but it was more permanent than expected.

It’s the drug that replaced Sodium Pentothal after that drug became generally unavailable.

Why did it suddenly become unavailable?

Apparently, doctors were using Sodium Pentothal to execute people with lethal injections, and various groups and countries opposed to the death penalty have used legal and other sorts of pressure on suppliers.

Sodium Pentothal is hard to get.

But that’s okay because Propofol puts you out like a switch.

One second you are on.

The next second you are off.

If you are lucky, they turn you back on.

There’s little, if any, anesthetic hangover. And it doesn’t cause nausea or vomiting.

Plus it’s an amnesic drug which means that you forget the bad stuff that happened when you were on it.

Poof! All the pain of those moments is gone!

Thinking about my personal experience with propofol (yeah, the colonoscopy) reminds me that the only part of life that really matters (at least to me) is the part where I’m conscious.

The part of my life where propofol turned off the switch is completely gone.

SIDE NOTE: The State of Missouri wanted to use propofol for a condemned man’s execution, but if the execution had gone ahead, US hospitals could have lost access to the drug because 90% of the US supply is made and exported by a German company subject to European Union (EU) regulations that restrict the export of medicines and devices that could be used for capital punishment or torture. Fearing a ban on propofol sales to the United States, in 2012 the drug’s manufacturer, Fresenius Kabi in Bad Homburg, ordered its US distributors not to provide the drug to prisons.

I’m selfishly glad they made that decision since the doctor got to use propofol for my colonoscopy.

It’s a lot less comfortable without it and besides, I didn’t have to remember the actual event.

The prep was bad enough!

In fact, if I have to die at some point, propofol sounds like a good way to go.

Some of the alternative ways to die are not so pleasant.

Lights on.
Lights off.

But back to the conscious part, because that’s the part that matters.

The conscious part never happened, at least not the way you remember it.

I have a notoriously bad memory, but your memory is bad too!

How are your childhood memories really?

Even if you can remember something, how do you know that what you remember really happened?

Maybe it’s just something that your parents told you.

Keep in mind, we can remember things that didn’t happen

This scary ability has been studied by psychologists.

In an experiment, interviewers were able to convince 70% of people they had committed a crime when in reality they had not.

Even at THIS moment, you aren’t seeing things the way they really are!

Take a look at these examples from the world of color.

Try to convince yourself that you believe what you see!

Then try to imagine what it’s like to do color-grading on a movie when you realize you can’t!

You name the sense and it’s a poor representation of reality.

Then try remembering that stuff!

For the most part, life only matters when the switch is on and whatever you thought happened didn’t really happen that way, and whatever you think is happening right now is only a poor representation of what’s really going on, and when you try to remember it, you are going to get it wrong!

That says NOTHING about what you think is going to happen in the future!

So what’s a person to do?

Life is whatever you imagine it to be.

The past doesn’t matter anymore and you certainly can’t predict what the future will be like.

I’d suggest living this glorious moment and making it as special as you can imagine.

Those possibilities are endless.