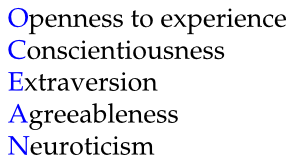 Home » Blog » Coaching » Personality Traits: How Coachable Are You?

Read this to find out if you have the personality traits to be successful in a coaching or mentoring program.

If you take the KBF Assessment, you will get back an e-mail with two pieces of information.

The KBF Assessment Type is: A10O9C6E10N2
Coachability Score is: 8

Here’s how to interpret your results …

In psychology, the Big Five personality traits are five broad domains or dimensions of personality that are used to describe human personality.

The theory based on the Big Five factors is called the Five-Factor Model.

During studies, the Big Five personality traits show consistency in interviews, self-descriptions, and when observed.

If you would like your KBF Assessment Results, just go to this page and check off all of the statements that apply to you and you will be e-mailed the results instantly — plus a bonus assessment of how coachable you are. (Don’t worry, you won’t be added to any e-mail list.)

The KBF Assessment Type evaluates on a 0 to 10 scale the degree to which you have those particular traits.

Here are the key areas examined …

Agreeableness is a tendency to be compassionate and cooperative rather than suspicious and antagonistic towards others. The trait reflects individual differences in general concern for social harmony. Agreeable individuals value getting along with others. They are generally considerate, friendly, generous, helpful, and willing to compromise their interests with others. Agreeable people also have an optimistic view of human nature.

Although agreeableness is positively correlated with good teamwork skills, it is negatively correlated with leadership skills. Those who voice out their opinion in a team environment tend to move up the corporate rankings, whereas the ones that don’t remain in the same position, usually labeled as the followers of the team.

Disagreeable individuals place self-interest above getting along with others. They are generally unconcerned with others’ well-being and are less likely to extend themselves to other people. Sometimes their skepticism about others’ motives causes them to be suspicious, unfriendly, and uncooperative.

A person with a high level of agreeableness in a personality test is usually warm, friendly, and tactful. They generally have an optimistic view of human nature and get along well with others. A person who scores low on agreeableness may put their own interests above those of others. They tend to be distant, unfriendly, and uncooperative.

Openness is a general appreciation for art, emotion, adventure, unusual ideas, imagination, curiosity, and a variety of experiences. People who are open to experience are intellectually curious, appreciative of art, and sensitive to beauty.

They tend to be when compared to closed people, more creative and more aware of their feelings. They are more likely to hold unconventional beliefs. There is a strong connection between liberal ethics and openness to experience such as support for policies endorsing racial tolerance.

Another characteristic of the open cognitive style is a facility for thinking in symbols and abstractions far removed from concrete experience.

People with low scores on openness tend to have more conventional, traditional interests. They prefer the plain, straightforward, and obvious over the complex, ambiguous, and subtle.

They may regard the arts and sciences with suspicion or view these endeavors as uninteresting. Closed people prefer familiarity over novelty; they are conservative and resistant to change.

Conscientiousness is a tendency to show self-discipline, act dutifully, and aim for achievement against measures or outside expectations. The trait shows a preference for planned rather than spontaneous behavior. It influences the way in which we control, regulate, and direct our impulses. The average level of conscientiousness rises among young adults and then declines among older adults.

Extraversion is characterized by positive emotions, urgency, and the tendency to seek out stimulation and the company of others. The trait is marked by pronounced engagement with the external world. Extraverts enjoy interacting with people and are often perceived as full of energy. They tend to be enthusiastic, action-oriented individuals. They possess high group visibility, like to talk, and assert themselves.

Introverts have lower social engagement and activity levels than extroverts. They tend to seem quiet, low-key, deliberate, and less involved in the social world. Their lack of social involvement should not be interpreted as shyness or depression. Introverts simply need less stimulation than extroverts and more time alone. They may be very active and energetic, simply not socially.

Neuroticism is the tendency to experience negative emotions, such as anger, anxiety, or depression. It is sometimes called emotional instability or is reversed and referred to as emotional stability.

According to Eysenck’s (1967) theory of personality, neuroticism is interlinked with low tolerance for stress or aversive stimuli.

Those who score high in neuroticism are emotionally reactive and vulnerable to stress. They are more likely to interpret ordinary situations as threatening, and minor frustrations as hopelessly difficult.

Their negative emotional reactions tend to persist for unusually long periods of time, which means they are often in a bad mood. For instance, neuroticism is connected to a pessimistic approach toward work, confidence that work impedes personal relationships, and apparent anxiety linked with work.

Lacking contentment in one’s life achievements can correlate to high Neuroticism scores and increase a person’s likelihood of falling into clinical depression.

Emotional stability refers to a person’s ability to remain stable and balanced. At the other end of the scale, a person who is high in neuroticism has a tendency to easily experience negative emotions.

Neuroticism is similar but not identical to being neurotic in the Freudian sense. Some psychologists prefer to call neuroticism by the term emotional stability to differentiate it from the term neurotic in a career test

So if you take the test you will know on a scale of 0 – 10 the degree to which you exhibit traits in each of the categories.

Each of the five categories of personality traits affects the degree to which coaching and mentoring will be successful for you.

In the case of the KBF Coaching Score, the system uses a weighted index of the positive and negative scores you received in each of the categories and uses it to come up with a score from 0 to 10.

Openness, conscientiousness, extraversion, agreeableness are positively weighted and neuroticism is negatively weighted according to the degrees that influence your success in a coaching or mentoring program.

If your coaching score is below 5, you probably need a coach or mentor, but your level of success may be much lower than someone who scores a 10.

If you haven’t gotten your score yet, you can do it now at: