The War of Art has inspired people around the world to defeat “Resistance”; to recognize and knock down dream-blocking barriers and to silence the naysayers within us. Resistance kicks everyone’s butt and it’s trying to kick mine.

To make it worse, all creative types experience “resistance” from not only the inside, but from outside critics.

If you are looking for affirmation from “the group,” then outside critics sing LOUD.

If you ever want to know how your values affect your life, touch base with the amazing Mitch Axelrod. Mitch doesn’t talk about it a lot, but he is a master of Axiometrics and he recently gave some powerful insights to members of my Impact Platinum Mastermind. If you want to be really clear on the ways you make decisions or what your motivations are Mitch Axelrod can definitely help.

According to my values profile, I pay a lot of attention to what the group says.

The very real question is, “Should You?”

Of course, you want the thing you created to be loved by “everyone.”

And equally true, if you create anything, you are doomed to learn that nothing is liked by “everyone.” 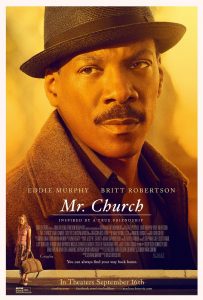 One can only speculate why Eddie Murphy would choose to end his four-year hiatus from the big screen with the extremely misguided interracial drama “Mr. Church.” If this were an attempt to secure a second Oscar nomination after his well-deserved one for “Dreamgirls,” he’s barking up the right tree. The Academy loves its servile Black people, and “Mr. Church” is directed by Bruce Beresford, who seems to be addicted to this kind of character. After helming this, an episode of “Roots” and Best Picture-winner “Driving Miss Daisy,” Beresford should be forced to join “Subservient Cinematic Negroes Anonymous” and work through their 12-step program. Until then, viewers must yet again contend with a movie where a White character gushes about what Noble Negritude has done for them.

Of course, Roger’s “Most Hated” movies include “The Usual Suspects” and “The Village” both of which I secretly liked.

Actually, I didn’t think much about race when I watched the movie.  I mostly thought about people helping people throughout life and about it flowing both ways.  I didn’t see gushing, I saw love.

But, I could have seen those perspectives.  In fact, after reading Roger’s critique, it’s hard not to.

It’s in our personal framing.

Why can’t people just see the world as we do?

Which takes me back to your latest creative effort.

Nobody sees your work the way you do.

They don’t see the complexities you see.  In fact, they probably only catch two or three hints about what you are trying to say.

That’s the way the mind works.  We can only remember about three things at a time.

So who is to say what is good or bad?

All we can do is tell the truth.

I’d live to encourage you to try to tell your story clearly and hope that someone sees something in what you had to say to make the world if not better, at least better understood.

Oh … and that resistance.

When something someone says stops you from creating what you want to create, it’s not productive.

Nothing good comes from being inactive.

Weigh the wisdom of the critic and look at their perspective while you open yours.

Do something.  That’s the only cure for the “resistance”